The SVOM space mission (SVOM stands for Space based multi-band astronomical Variable Objects Monitor) is a French-Chinese mission dedicated to the detection and study of gamma-ray bursts, and in a larger extent to the transient sky, planned to be launched mid-2023. 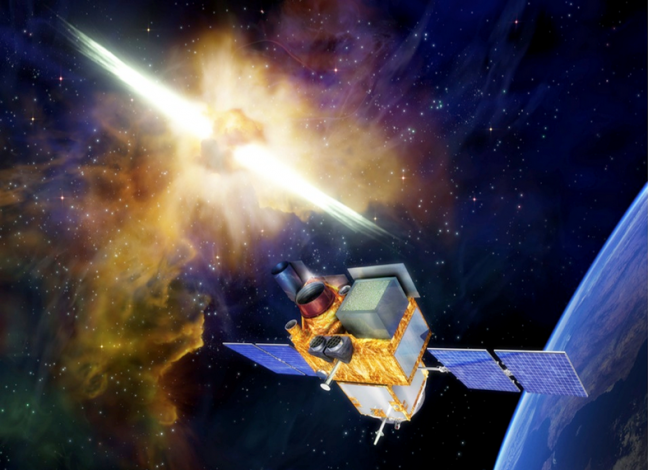 The gamma-ray bursts (GRB) are intense gamma-ray emission coming from the collapse of massive star or the merging of neutron stars. They are perfect tools to explore the highly-redshifted universe and study the physics in extreme conditions. Moreover they have been recently associated to the emission of gravitational waves an thus play an important role in multi-messenger astrophysics. In addition to the GRB, SVOM will study different transient sources like AGNs, Blazars, etc... in the framework of the General Program (GP).

The transient nature of the phenomena and the rapid fading of the source, makes it difficult to observe. The SVOM mission will consist in several instruments covering a large wavelength coverage to study these phenomenon in more details.

ECLAIRs telescope plays a very important role in the mission since it detects the GRB and provides the first localisation. ECLAIRs  is a coded mask telescope covering the x-ray domain (4keV-150keV). Once roughly localised, the satellite slews autonomously and uses its narrow field of view instruments MXT (x-ray) and VT(visible) to provide a better localisation and study the afterglow emission of the GRB. At the same time, an alert is sent to the ground and is collected thanks to a dedicated VHF antenna network and this alert allows our robotic telescopes on the ground to follow the event as well.


APC is also involved in the development of the ECLAIRs scientific pipeline (ECPI). The data analysis consists in several and successive steps that allows to go from the raw data as recorded by ECLAIRs (cf. Fig. 4) to scientific products (cf. Fig. 5) like sky images, lightcurves, spectrum or catalog of sources. The ECLAIRs pipeline runs on the ground in the French Science Center (FSC) infrastructure. The FSC is in charge of the coordination of the different activities of the pipelines of all the intruments and manage the interfaces between the different services (database, API REST...) of the SVOM ground segment.