A scouting mission for the JEM-EUSO mission

EUSO-Ballon is a prototype of the future UV telescope for the detection of ultra-high-energy cosmic rays aboard the International Space Station (ISS): JEM-EUSO. The JEM-EUSO collaboration carried out a complete subset of the focal plane of the experiment between 2012 and 2014 (consisting of 36 64-channel multi-anode photomultipliers, 36 ASICs, FPGA board, Telemetry, etc.) - a scientific set to validate the different technologies envisaged and, more generally, to validate the entire chain of detection of the future mission, from the detector to the data storage, via electronics Processing, triggering process for event recording, electronics, mechanics, etc. 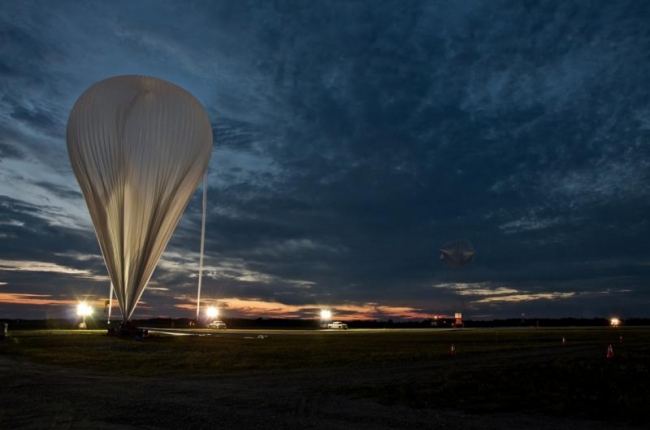 The EUSO-Ballon mission, funded by CNES, made it possible to carry out the first technological flight of the instrument on board a stratospheric balloon during the night of 24 to 25 August 2014. This flight, which was a great success for The APC, which assumed the direction of the project, validated the concept of measurement, the determination of the UV signal from the ground (which will represent a background noise for the observation of cosmic sheaves) Simulated events (xenon flashes and laser shots across the field of view).

After the success of this first flight, the EUSO-Ballon mission aims at the first UV detection of a giant atmospheric jet from the sky, which should occur during a second long-term flight from New Zealand. March 2017, under the aegis of NASA.

JEM-EUSO (Space Observatory of the Extreme Universe aboard the Module of Japanese Experiments) is a new type of astronomical observatory aboard the ISS, designed to elucidate the origin of ultra-high energy cosmic rays, recognized as one of the eleven priority scientific questions of the twenty-first century. It is the result of a collaboration of 85 institutes from 16 different countries.

The JEM-EUSO experiment aims at detecting fluorescence light emitted in the UV in the Earth's atmosphere, following the development of a sheaf of particles induced by the interaction of a cosmic ray of extreme energy, greater than 3 1019 eV. Because the telescope is located on the ISS at an altitude of 400 km, its angular aperture of ± 30 ° gives it a field of view of 460 km diameter at ground level, giving it a power of observation close to Ten times that of existing ground experiments..

The main scientific questions to be answered by JEM-EUSO are: