The objective of the ESA Planck mission is to measure CMB temperature and polarization anisotropies with unmatched sensitivity. The APC participated in the calibration of the Planck HFI detector prior to its launch on May 14, 2009, and now focuses on data analysis with a particular interest in polarization measurement. 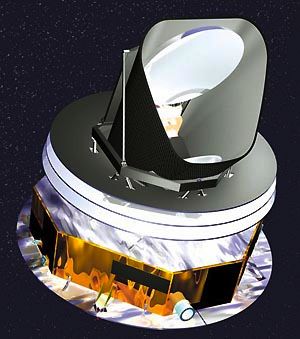 The cosmic microwave background (CMB) whose spectrum is a quasi-perfect black body is a fossil radiation from the first moments of the Universe. The APC laboratory is participating in the measurement of its anisotropies as part of the European Space Agency's (ESA) Planck space mission, which was launched on 14 May 2009. Planck will be able to measure temperature fluctuations with Angular resolution of the order of 5 minutes of arc and an accuracy only constrained by the knowledge of the foregrounds. We will therefore be able to calculate the power spectrum of the primordial fluctuations up to multipoles of the order of I = 2100.

Planck will also make it possible to measure with very good accuracy the polarized anisotropies of E-type up to resolutions of 10 minutes of arc and should detect the polarization B induced by the presence of structures in the Universe. This information is extremely important from a theoretical point of view, since it will give us information about the possible period of reionization of the universe and on the primordial gravitational waves (which also generate fluctuations in the metric, namely tensor fluctuations).

The Cosmology and Gravitation groups of the APC laboratory are involved in the high-frequency instrument (HFI), whose main supervisor is Jean-Loup Puget (IAS Orsay). The frequencies covered by HFI (100, 143, 217, 353, 545 and 853 GHz) provide for effective foreground separation, while 143, 217 and 353 GHz channels are polarized to measure the polarized power spectra E And B and their correlations with temperature..

Expected map of the sky for Planck

The large amount of data to be processed (about six billion samples per bolometer for one year of data collection) requires adapting existing algorithms and acquiring specific tools. Moreover, with much more precise measurements, it will no longer be possible to neglect certain effects such as the presence of distant or asymmetrical lobes. The activity of our group in the Planck program concerns:

The scientific topics of interest to the group are the study of polarized B-type anisotropies of cosmic microwave background, astrophysics of clusters of galaxies probed using the Sunyaev-Zeldovitch effect and diffuse infrared background.

Michel Piat (APC) is the Deputy Instrument Scientist of Planck's HFI instrument. In this capacity, he made an important contribution to the development of the instrument, to the study of systematic effects and to photometric calibration in flight. He also participated in ground calibration and simulation of the instrument's behavior in flight, particularly at the thermal and sensing chain. After the launch, he will participate in the consortium in the daily monitoring of the behavior of the instrument during the observation phases in order to optimize in real time its performances.

Our responsibility in the global calibration of the HFI detector concerned the construction of the optical device installed in the Saturn tank at the IAS d'Orsay and the control of the entire calibration bench. Some parameters need to be adjusted in flight, such as bolometer bias voltage values or the lobes of each channel measured with high precision from point sources (Jupiter and Saturn). Other parameters, such as the spectral response and the orientation of the polarizers in the focal plane, could not be obtained in flight, so it was necessary to characterize them on the ground. The HFI instrument was therefore placed in an environment close to that which it now knows in flight, that is to say in a vacuum (10-7 torr), and in an "optical environment" close to that of CMB is about 2 K.

On the ground, the work consisted in the installation of a calibration cryostat with its millimetric optics bench that in May 2004 hosted the model of qualification (CQM) and then in autumn 2004 the model of flight. Our responsibility for the optical device was:

To carry out all these studies and realizations we have continued the establishment of a laboratory specialized in working at millimeter wavelengths, equipped with several 4K cryostats, photometers of which a new one operating at 300 MK and a x-y table driven by a PC. This combination has allowed us to develop a new know-how in our Laboratory and today gives us opportunities to contribute in a much more important way to the new projects that will emerge in this field. 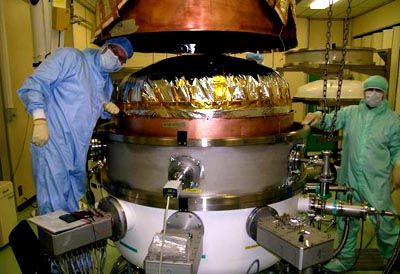 In the background of all these activities, it is also worth noting an important development work in computer science (database, control of the optical bench) as well as writing (quality control) of the documents necessary for the smooth running of a Space project in collaboration with ESA.

The Planck / HFI Core Team is made up of collaboration members involved in flight preparation, monitoring operations and day-to-day data analysis of the HFI instrument (IOT) and implementing Place of the official pipeline to produce the temperature and bias maps for each of the 6 frequency channels of the HFI instrument.

The CPA has implications in these three areas. He will be involved in the Instrumentation Operation Team (IOT), which will be responsible for operations during the flight and, after receipt of HFI data, will be responsible for ensuring proper behavior of the instrument in liaison with DPC (Data processing Center). To illustrate this aspect of the flight preparation work, there are contributions to the search for sources that can be used to reconstruct the Planck focal plane and the best parameters of the sky scanning strategy for Planck. 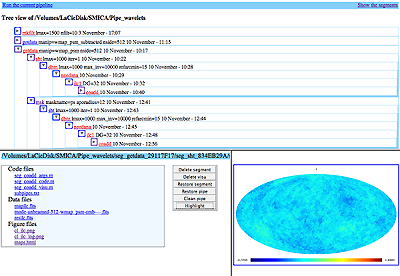 As part of the CPD, the CPA contributes to the establishment of the official pipeline and has a strong involvement in the Running and Checking Pipeline (PRAC), coordinated by Ken Ganga. For the pipeline itself, APC produced the pipeline module that estimates the noise in the signal of the various detectors and works in collaboration with the LAL (Orsay) team to write the production module Of the cards. In the case of the PRAC, its role is to verify the quality of the results coming out of the pipeline. His first role was to contribute to the verification of the relevance of the simulations producing HFI instrument data and to the quality of the results of the first End-to-End Tests of the pipeline. Ultimately, this group will be in charge of validating the results that will be made available to the scientific community.

The Planck group of the PCA also plays an important role in the part of the pipeline that prepares the separation of contributions to the signal from either the CMB or the astrophysical components. Finally, the APC participates in the working group 'CTP', whose objective is to characterize and compare the various algorithms for the production of maps and the calculation of power spectra.

Polarization of the Cosmic microwave background

The CMB anisotropies are polarized by Thompson scattering at the final diffusion surface. At the moment of decoupling, the optical depth decreases and the electrons observe a local anisotropy of the radiation originating from the quadrupole moment induced by the density perturbations, the electron movement (Doppler effect), and the primordial gravitational waves (which are intrinsically quadrupole). The Thompson interaction converts this quadrupolar intensity variation into scattered radiation that is linearly polarized. Thus, polarization gives us a direct view of the conditions on the surface of last diffusion (and of reionization). A level of polarization of the anisotropies of the order of 10% is expected.

The linear polarization can be decomposed into two parts of different parity: E with an even parity and B with an odd parity with respect to the reflections on the sphere. By respecting parity symmetry, density perturbations produce only part E, while gravitational waves generate both part E and part B. The measurement of the primordial modes B would thus be the unique signature of the gravitational waves. There is, however, another source of mode B: the gravitational lens effect of mode E by the large structures along the line of sight between the surface of last diffusion and us. 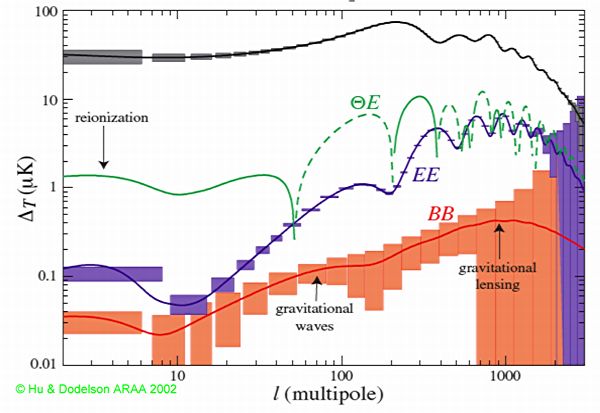 The detection of gravitational waves from inflation would be a major discovery for cosmology and for fundamental physics. It would also mean that they are well produced by the mechanism of excitation rather reserved for quantum fields, an indication of the quantum nature of gravity.

It is understandable why the detection of the B modes of the polarization of the cosmic diffuse background (probable with Planck with respect to the part induced by the lens effect, more hypothetical for the primordial component, trace of inflation) constitutes one Of the main objectives of our team within the framework of Planck and justifies all the theses that have been conducted on the subject.

By crossing the Universe, the radiation of the cosmological background interacts with the great structures of the Universe that are clusters of galaxies. The gas inside the cluster can reach temperatures of several million degrees. At these temperatures, the gas emits in the area of ​​X-rays by braking radiation. The electrons themselves can diffuse the CMB photons by inverse Compton scattering. It is this inverse Compton scattering process which is called the Sunyaev-Zeldovitch effect (SZ).

The surface brightness of a cluster in SZ is independent of the distance that separates us from it. Thus, the SZ effect will be more easily detected indirectly by the SZ effect than directly in the visible range or X. Thus, the SZ effect proves to be a unique means of detecting new clusters at great distances. The clusters of galaxies are very good tracers of the content in matter and energy of the Universe. At present, only SZ images of clusters already observed in the visible or X have been produced but the next generation of instruments such as Planck will be able to detect new clusters.

The observational cosmology group works on the SZ effect at several levels. We wrote a quick SZ simulation code, and developed an algorithm to detect clusters of galaxies in 10-square-meter maps in about fifteen minutes. We have also studied the effects of selection of an SZ sounding: some clusters, too small or too large, drowned in the primary anisotropies of the CMB or the instrumental noise, are poorly counted. Quantifying these selection effects is crucial to go back to the actual cluster distribution. Finally, we performed a combined study of the WMAP satellite data and the Archeops balloon experiment for SZ.

The infrared diffuse background (FIRB in English for Far InfraRed Background from 100 to 800 μm) consists of all the radiation emissions in the wavelengths corresponding to the infrared, either directly or by absorption and radiation of the dust , Or by shifting to red undergone by other radiation due to the expansion of the Universe. Its study allows to give important constraints on the emission of energy in the history of the Universe. Through the use of high frequency channels of the HFI instrument, Planck will be able to make measurements of brightness and spatial variations in this wavelength range. The CPA, as part of Planck Working Group 6, wishes to have a contribution in this area..

The measurement of the polarized anisotropies of type E and B (induced by the presence of structures in the Universe) is extremely important since it will inform us about the period of reionization of the universe and on the primordial gravitational waves.