The main purpose of this astronomical observation satellite is to study dark energy, using two complementary techniques: the effects of gravitational lenses, in which the foreground material deforms background galaxies, and l Study of the distribution of galaxies in the Universe ("large structures"), in particular via the technique of baryon acoustic oscillations (BAO). 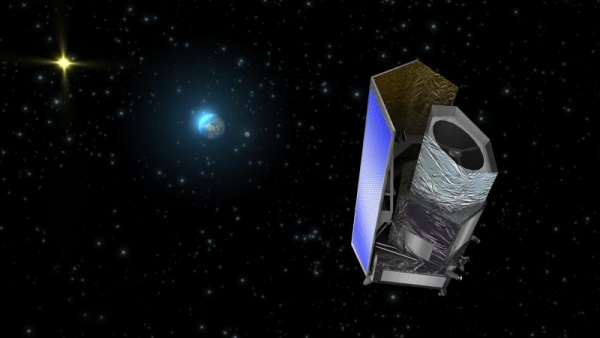 Euclid at L2 point (artistic print)
The satellite will be placed in orbit around the L2 Lagrangian point of the Earth-Sun system, so that the observations are not disturbed by the light of the Sun, Earth and Moon. The observations are expected to last six years.
Euclid has two instruments. A visible imager provides very high definition images in a wide spectral range. These images are mainly intended to measure the shape of more than a billion galaxies in order to detect the effects of gravitational lenses. The infrared instrument has two modes of operation: a slit-less spectrometer, to measure the red displacement of several tens of millions of galaxies and measure their spatial distribution, and a three-band imager To measure, in a less precise way but applicable to billions of objects, distances via the technique of "photometric redshifts", a measure indispensable for exploiting the effects of gravitational lenses. For these measurements, photometric measurements must also be available in the visible. Euclid is deliberately not equipped with narrow strips in the visible, as such measurements are feasible from the ground, for example by the DES, PanSTARRS, or LSST projects.
In June of 2010, the APC Cosmology group joined the consortium which proposed Euclid. ESA selected Euclid for its M2 call in 2012, anticipating a launch that is now scheduled for the end of 2020. The APC teams are involved in the construction of the satellite (study of the effects of cosmic rays), but their main contribution concerns the ground segment: the FACe is responsible for the development platform used by the project, and the team is also in charge of the fusion of Euclid data with ground data for obtaining photometric redshifts, especially with LSST. Just as the group has done in the CMB, using a combination of the space-based Planck and ground-based QUBIC and Polarbear, we anticipate that the combination of the Euclid and LSST platforms will allow us to do both better.