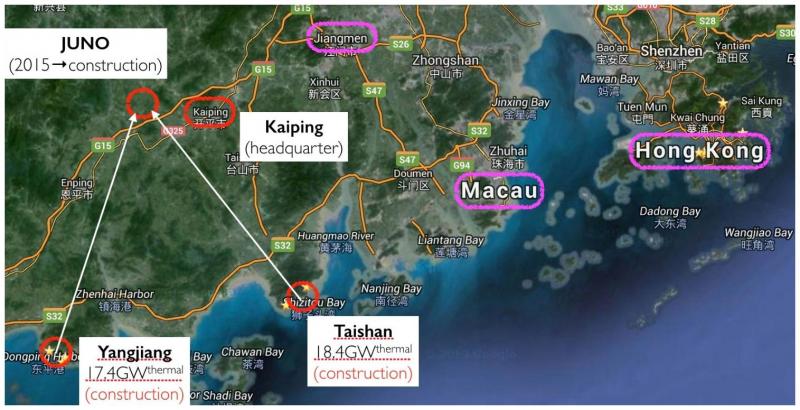 The JUNO experiment (based China) is based on an international collaboration from institutions from China, Europe, Russia, Taiwan and US. JUNO is a new project involving the construction of the largest ever built liquid scintillator detector (~20ktons) aiming to perform high precision neutrino oscillation measurements with reactor neutrinos (similar to Double Chooz). The detector, thanks to its huge size (comparable to the fiducial volume of SuperKamiokande) and the higher sensitivity (higher light yield, lower energy threshold, etc) at low energies is also sensitive to neutrinos from other (non man-made) sources, such as supernovae, geo-neutrinos as well as atmospheric and solar neutrinos (large backgrounds expected).

The main physics channels of JUNO (not exhaustive list) are: 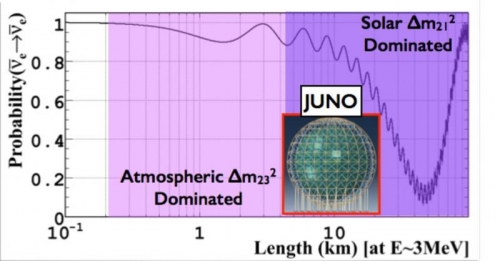 The basic rationale behind the reactor neutrino high precision physics is illustrated in the figure on the left, where the large disappearance expected from θ12 can be measured with high precision and the frequency pattern of the sub-dominant wiggles, due to θ13, is sensitive, with a remarkable energy resolution (≤3% @ 1MeV), to distinguish between different “normal” and “inverted” ordering scenarios. The measurement of the Mass-Ordering is complementary to those obtained via atmospheric neutrinos (such as ORCA & PINGU) and/or long baseline beams (such as DUNE) exploiting maximally matter (or MSW) effects to enhance the signal. Both techniques are regarded as important cross-check of one another and their complementarity might be further exploited in the future for further precision.

JUNO is the only experiment in the world (today) expected to measure the “solar sector” neutrino oscillation parameters with a 1σ error <1% (relative). Such a remarkable precision will benefit (via both combination with another experiments and/or combination with all world experiments) the measurement of the δ-CP violation phase, in-built in the PMNS mixing matrix for (light) neutrinos.

The possibility to perform high precision measurements with the rarest (one every ~30years) core-collapse Super-Nova neutrinos is a unique opportunity of critical importance to improve our understanding of stellar and neutrino oscillation physics. JUNO will be one of the best detector ever built to exploit maximal information from those neutrinos, thanks to its large size (high statistics within our Galaxy perimeter) and the multiple neutrino types interaction available with liquid scintillator as a target. An example of the famous SN-1987 (observed by a few neutrino detectors) is show in the picture below, before and (impressively) during explosion. 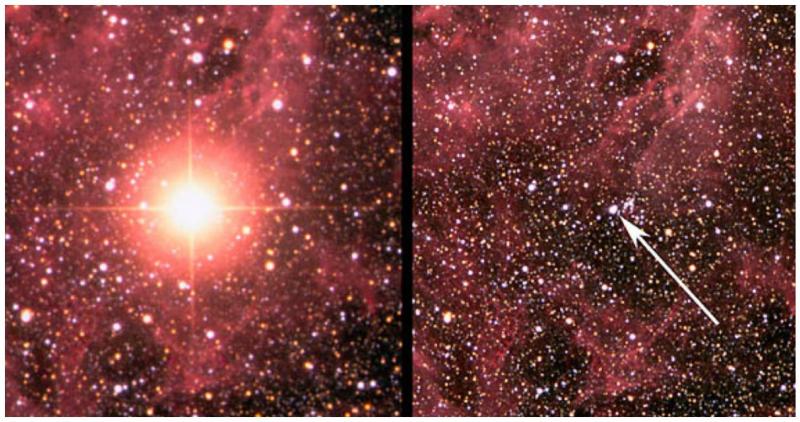 Experimentally, the main challenge of JUNO, beyond its remarkably large size (becoming the 2nd largest neutrino detector in the world), is the (unprecedented) extremely precise calorimetry control needed to achieve maximal sensitivity to the atmospheric Mass-Ordering. Once this is possible, virtually all other physics channels are easily covered in terms of detector performance. The energy resolution requirement not only imposes the mandatory reduction of the intrinsic stochastic term to be <3%, implying an impressive light yield ≳1200PE/MeV (very expensive largest photocathode coverage ever considered ~80%), but also the control of the non-stochastic resolution terms. Namely, those terms should be well below 1%. Most experiments so far (none aiming for such a high precision) have yielded up to ~1.5%, at most. Such a calorimetry control has important constraints on the detector and readout design and configuration.

@APC, we have expertise on liquid scintillator detector design and high precision calorimetry over the last decade. JUNO is envisaged to employ a similar readout scheme as Double Chooz (large PMTs & FADC digitising electronics), which was designed and optimised by APC in Double Chooz. So, our main focus is to help optimising the JUNO’s detector and readout systems design to yield high precision calorimetry, including all implications on the DAQ system, energy reconstruction concept and overall detector photo-detection system design. In fact, we have promoted the adoption of a new detector design employing two types of PMTs thus allowing two simultaneous energy scales with different systematics that are used to improve the overall response systematics budget of JUNO to yield the challenging <3% resolution at 1MeV. The novel design was proposed and scientifically approved by the collaboration in July 2015, so the APC (and collaborators) continues further optimising the calorimetry system of JUNO as main goal.