The LSST https://www.lsst.org telescope, which is currently being built, will take an image of the sky every 15 seconds, on a grid of the sky that it will cover in three nights. He will do this task for 10 years, so that we will get, in a way, a film from the sky. LSST will produce an impressive amount of data, nearly 15 terabytes per night.

The LSST camera is the largest digital camera in the world. It is equipped with a set of filters to measure the color of the objects photographed: galaxies, stars. Every hour, the filters will be changed. For this purpose, a filter changer has been developed. This complex system was designed and built by several IN2P3 laboratories. He has mobilized the skills of a dozen engineers in mechanics, electronics, instrumentation and computer science for nearly 10 years.

The APC is responsible for the control and command software of the camera and in particular for the control software of the filter changer. Particular attention had to be paid to the quality of the code, because dropping a filter is not an option! Indeed, these filters, which have undergone a long R&D process, are very valuable: the cost of all the filters is estimated at around 700k€.

The filter changer was assembled and tested for 6 months in the assembly hall of the LPNHE laboratory. And until the last minute, we fixed mechanical, electronic, computer and even electrical problems. When finally after having overcome all these difficulties, we managed to make filter exchanges correctly, it was happiness! 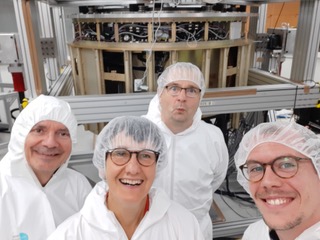 This is a very special moment: we have been working hard for 5 weeks to make the control work: setFilter.
And finally we just got there! You can see the joy on our faces, can't you?

The setFilter command is THE command that does it all: for example setFilter G sets the G filter to ONLINE position to be able to take pictures with the G filter, and then setFilter U does the same with the U filter after putting the G filter in its place of course.

And so for 4 weeks, since August 19, there have been problems: nothing was working properly and we were almost desperate to get there. As soon as one problem was fixed, another one appeared. The setFilter command never finished its job correctly.
Then we discover on September 13th at the end of the day, that we have a huge problem with the Protection System of the auto-changer which did anything. As a result, during the last week, this protection system is deactivated with only one week left to operate.
So we work like crazy:  Alexandre, Claire, Pierre and me. (Claire had unfortunately left during the photo.) And finally, at the end of the day, banco ! we manage to run several setFilter controls. Everything is working perfectly. (Pierre A. and Alexandre have made films from elsewhere)
In short, we are exhausted but so happy that we decide to immortalize this magical moment!