Mid-February, 2022, after 16 years of continuous operation, the first deep sea neutrino telescope, ANTARES, was powered down for the last time.

Neutrino astronomy has the objective to identify the astrophysical sources of cosmic rays and the mechanisms of their extreme acceleration. The small interaction cross-section and neutral charge of the neutrino allows them to escape from the interiors of dense astrophysical objects and traverse the Universe unhindered and undeviated. Their small cross-section is also a drawback, as their detection requires a large instrumented target mass, from tens of Mtons to Gtons, the so-called ''neutrino telescope''.

The adventure of ANTARES (Astronomy with a Neutrino Telescope and Abyss environmental RESearch) started in the late 1990s. A proto-collaboration was formed and first sea operations were carried out to explore potential installation sites, measure the water transparency, the level of sedimentation, bioluminescence and biofouling. In parallel, simulations were done to optimise the detector layout. As a result, the characteristic optical-module-triplet was chosen as storey geometry. In 2001 the main cable from the "Les Sablettes" beach at La Seyne-sur-Mer was laid to the chosen site located 40 km offshore at a depth of 2475 m. In 2002 the junction box was installed; it has served for 20 years in the deep sea without interruption. First prototype neutrino detection lines were operated in 2003 and 2005 validating the readout electronics and time synchronisation system. On February 14th, 2006 (see picture of Line 1 on Valentin’s day) the first 25-storey detector line was deployed, and by May 2008 ANTARES installation was complete with 12 such lines in total.

Since 2008, ANTARES has significantly contributed in the new endeavour of high-energy neutrino physics and multimessenger astrophysics. The detection principle of the ANTARES neutrino telescope is based on the observation of the Cherenkov light induced by secondary charged particles produced in interactions of neutrinos inside or near the ANTARES detector volume, a cylinder approximately of 250 m diameter and 500 m height.  In order to mitigate the atmospheric muon background, upgoing event are primarily searched for in the detector, as only neutrinos can cross the Earth, interact close to the detector and produce particles “from below”.

The discrimination of cosmic neutrinos from the background of less interesting particles relies on three methods:

1) The search for an excess of events in a small sky region over the expected background.

2) The search for an excess of neutrinos above a given energy, relying on the fact that the expected cosmic signal contains more energetic neutrinos than the background.

3) The searches for neutrino candidates, correlated in space and/or time with external triggers from other experiments, as gravitational wave interferometers, space experiments for X- and gamma-rays, radio and optical telescopes on ground, or other neutrino telescopes.

ANTARES contributed significantly to the effort to identify the sources of cosmic neutrinos, by constraining models and observing with high sensitivity the central region of our Galaxy, after the breakthrough discovery of evidence of a cosmic diffuse flux from the IceCube detector in 2013.

In particular, the ANTARES Collaboration developed specific strategies to look for neutrinos in time and/or directional correlation with known (or potential) sources of other cosmic messengers. The restricted space-time search window allows a significant reduction of the background from atmospheric neutrinos, therefore enhancing the sensitivity to faint signals. The possibility of joint multimessenger studies in conjunction with other probes (gravitational waves, charged cosmic rays, X- and gamma-rays, optical and radio telescopes) suddenly increased in interest in the scientific community after the observation of the first gravitational wave (GW150914) form the merging of two black holes. As the dismantling of the ANTARES detector was originally foreseen in 2016, this motivated the extension of data taking to ensure a smooth observational transition with the next generation  Mediterranean neutrino telescope (the KM3NeT detector).

In addition to astrophysics study, the data collected by the ANTARES detector were used for particle physics studies, in particular for the observation of atmospheric neutrino oscillations, to constrain not standard neutrino interactions, and to search for neutrinos from the annihilation of dark matter candidates. With the inclusion of information from some dedicated devices, the data collected by ANTARES were also used for marine sciences and geosciences: listening to mammals, observation bioluminescent organism, global change studies and its consequence on marine circulation and biodiversity.

At the end of 2021 the construction of the two KM3NeT detectors were sufficiently advanced to surpass the ANTARES sensitivity over its full energy range. It was therefore decided to shut down and dismantle the detector in 2022. The EMSO-Ligure campaign of the IFREMER "Pourquoi Pas?" ship offered the first occasion to unplug the cables between junction box and line anchors - a necessary prerequisite to proceed with the actual detector recovery. After the successful installation of various deep sea science equipment at the KM3NeT site, a dive with the Nautile submarine at the ANTARES site was performed. During this dive the vast majority of the cables between junction box and line anchors have been successfully unplugged. The Feb 14th 2022 marked the end of ANTARES data taking, 16 years exactly after the deployment of the first detector line. The follow-up steps of the dismantling are already scheduled for the near future.

During its scientific lifetime, the ANTARES Collaboration published more than 90 papers in referred journals (including the one co-authored by about 3500 peoples from about 70 different collaborations on the study of the merging of two neutrons stars on 17 August 2017); about 40 presentations per year were given at international conferences since 2008; and about 100 PhD students (mainly from France, Italy, The Netherlands, Germany and Spain but also neighbouring countries such as Morocco) defended their thesis related to the ANTARES telescope.

The Collaboration now plans to produce final studies based on the full data sample and release a legacy dataset for a wide community. 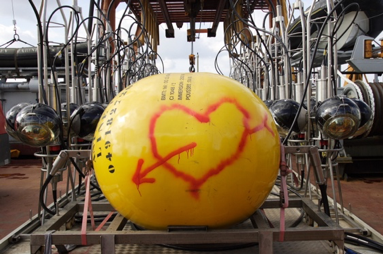 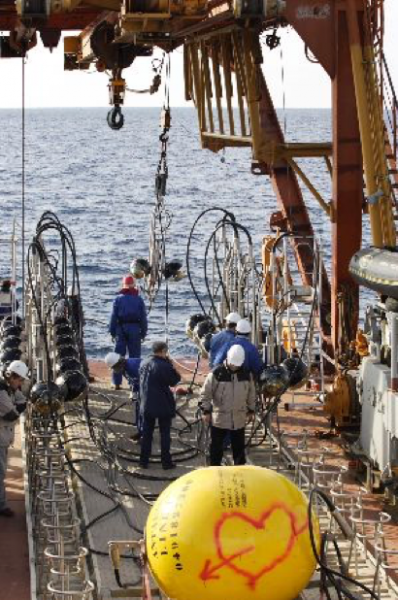 Final disconnection with Nautile of the first detection line in Feb 2022, with its distinctive red heart. First step of the dismantling operation. The white foam at the foot of the string is the result of the presence of a sacrificial anode.    ©: Collaboration ANTARES : 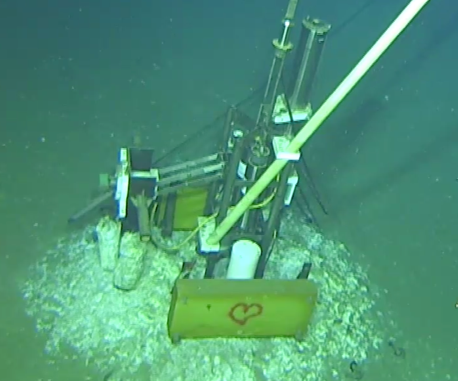 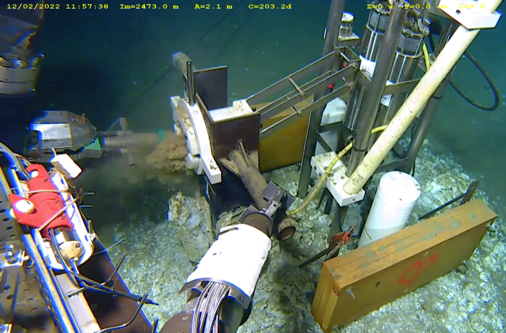