If neutrino oscillations are nowadays well established, several anomalies have been observed in short-baseline experiments with beam, radioactive source, and, recently, reactor neutrinos. A solution to this puzzle is provided by oscillations in one or more extra neutrinos, said sterile, and with no ordinary weak interactions except those induced by mixing. Although earlier CMB data seemed to confirm the anomaly and favor a number of relativistic degrees of freedom corresponding to more than three neutrinos, recent more accurate data of Planck prefers the standard scenario. A fourth neutrino, however, is not excluded. SOX (Short distance neutrino Oscillations with BoreXino) will clarify the problem by looking at the rate deficits and the oscillation patterns of electron anti-neutrinos produced by a very intense radioactive source, 144Ce-Pr, placed underneath the Borexino detector. 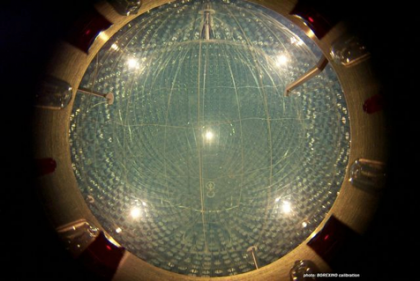 Borexino is a real-time detector for low energy Solar Neutrino Spectroscopy installed in the underground laboratories (3800 mwe depth) at Gran Sasso, Italy (LNGS). Borexino is specifically designed to measure the mono-energetic (862 keV) 7Be flux via neutrino-electron elastic scattering in ultra-pure organic scintillation liquid. The physics potential of Borexino strongly depends on the unprecedented requirements of low-level background. The exceptional radio-purity reached by the Borexino is 1-2 orders of magnitude better than the design requirements: ~10-17 grams of 238U and 232Th per gram of scintillator. This unexpected exceptional radio-purity allowed to extend the Borexino Solar neutrino detection, beyond the 7Be line, to pep, pp, 8B and, potentially, to CNO neutrinos.

Internal view of the Borexino detector (Credit: The SOX Collaboration)

Borexino has already achieved a number of fundamental results in solar neutrino, geo-neutrino, and fundamental physics. The very low radioactive background of the Borexino detector, its large size, and the well-proved capability to detect both low energy electron neutrinos and antineutrinos make an ideal case for the study of short distance neutrino oscillations with the 144Ce-Pr anti-neutrino source at Laboratori Nazionali del Gran Sasso.

The source is foreseen to be deployed in fall 2017 and the data taking will last about 1.5 years. SOX has hence the potential to provide in a relatively short time a unique and unambiguous proof of the existence of sterile neutrinos. 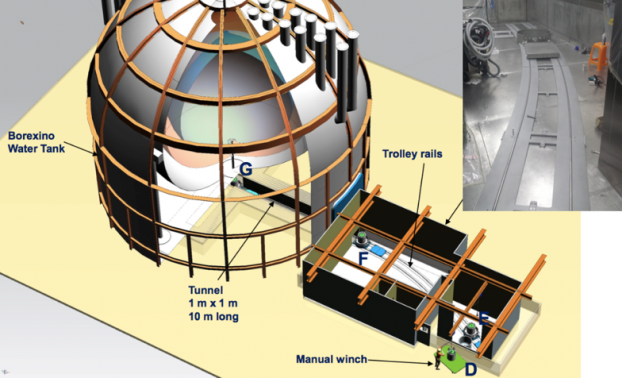 The SOX team at APC