On Monday 20, April 2020, the Double Chooz international collaboration (100 scientists in 25 institutions over 7 countries; Brazil, France, Germany, Japan, Spain, Russia and USA) published its latest result in Nature Physics (Hervé de Kerret et al). The experiment is located in the LNCA laboratory CNRS/IN2P3-CEA within the Chooz nuclear reactor of Electricité de France (EDF). This publication condenses about 10 years of work and the latest techniques of reactor neutrino analysis developed by the collaboration to yield its latest insight in θ13 and other key measurements of high precision in reactor neutrino physics. APC gave key contributions to the project.

The measurement of θ13 within the 2011-2012 was one of the most important breakthroughs in the establishment of the neutrino oscillation phenomenon, whose model was conceived to explain about 50 years of world experimental data thanks to a major phenomenology effort. Although the model was well established as the most coherent solution to the “solar and atmospheric anomalies” since early 2000, the observation of θ13 was the ultimate confirmation, as it was the main testable prediction of the model. Indeed, the Nobel Prize in Physics was awarded shortly after (2015) to the SNO (Canada based – Dr McDonald awarded) and Super-Kamiokande (Japan based – Dr Kajita awarded) experiments for the phenomenon discovery with solar and atmospheric neutrinos. However, the θ13 brought one extra surprise: its “large” value (compared to expectations) makes it possible to measure a CP violation phase in the leptonic mixing sector of the Standard Model of Particle Physics; up to several orders of magnitude higher than the observed values in the quark sector. The exact fraction of CP-violation remains unknown but the current evidence favours large values indeed. Thus, this scenario brings hope for a less distant future explanation behind the so far observed and still non-understood matter-antimatter asymmetry in the Universe during formation (see for instance: http://www.cnrs.fr/fr/ou-est-passee-lantimatiere-leclairage-prometteur-des-neutrinos).

The main challenge behind the measurement of θ13 has been the extreme control of experimental systematics, where new record of sub-percent precision in neutrino physics was achieved. Hence, the agreement of the three redundant experiments — Double Chooz (France), Daya Bay (China) and RENO (South  Korea) — is key to ensure both precision and accuracy of the measurement world-wide. The latest result of Double Chooz [sin2(2θ13)=0.105±0.014] comes along with a unique analysis carefully scrutinising the accuracy; i.e. possible bias effects. Despite the overall consistency found (≤2σ), the latest central value is slightly higher. The measurement is so difficult that, as of today, there is no foreseeable improvement ahead. In this publication, Double Chooz exploits its single and simplest geometry (“iso-flux”) multiple detector configurations to realise among the most precise measurements of the reactor neutrino flux today. The latest data demonstrates a large spectral distorsion (first reported by Double Chooz in 2014), very consistent with Daya Bay data, as well as the world most precise flux measurement via the mean-cross section per fission [5.71±0.06× 10−43 cm2]. Double Chooz was also able to turn its θ13 measurement to probe the consistency of the standard reactor flux uncertainties, which is found to be significantly underestimated. Thus, indirectly, the latest result is consistent with a likely recognition of our poorer understanding of a reactor neutrino flux, as compared to other more exotic hypotheses that cannot be fully ruled out neither.

The latest analysis pioneers a new technique for neutrino detection, called total neutron capture, enabling a major increase in statistics and the reduction of the most complex detection systematics. Such a technique was expected to be impossible during the detection construction, so that the precision in the detector volume knowledge was relaxed. This knowledge could be recovered during the (ongoing) detector dismantling. The Double Chooz ultimate precision is still expected to improve significantly for the next and last publication, for which analysis is currently ongoing with more data.

•Responsible of Double Chooz CNRS/IN2P3 and APC and IJC laboratories. 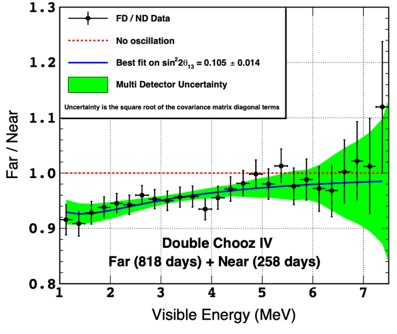 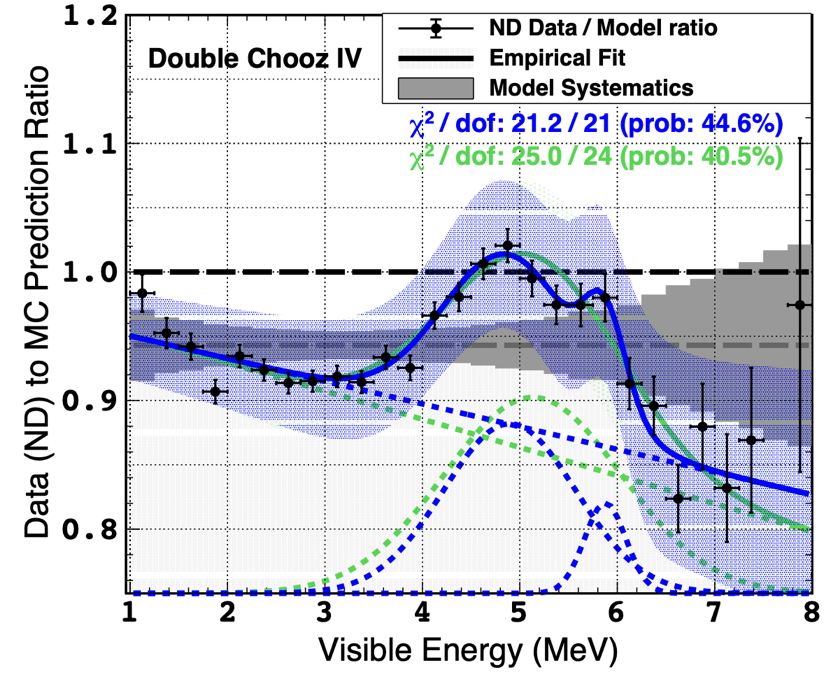 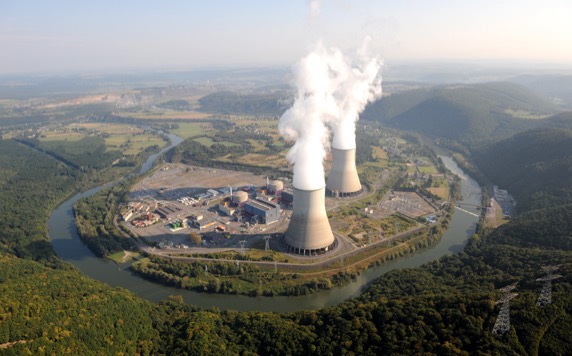