The APC is involved in R&D work on an imager consisting of a Single Photon Avalanche Detectors (SPAD) matrix. This development was motivated by the need for a single photon sensitive imager necessary for the realization of a compton telescope of the Gamma Cube type. The concept behind the Cube gamma has been patented and can be used in the context of a medical gamma camera. The development of an SPAD imager can also be used for other scientific applications such as:

In this context, the APC, in collaboration with the Le2i laboratory in Dijon, has developed a prototype of a SPAD matrix:

This development is a first step towards the realization of large imagery (10 cm).

The principle of imaging a gamma camera using this imager is based on the formation of images of light traces within a scintillator following the model of a plenoptic camera. A network of small lenses produces a network of images on an imager.

Since scintillators produce only a small amount of light, a single photon-sensitive photodetector capable of producing an image with a resolution of about 100 μm is required.

The SPADs (Single Photon Avalanche Detectors), the basic elements of SiPMs, are capable of detecting a single photon and have typical dimensions of the order of a few tens of μm. 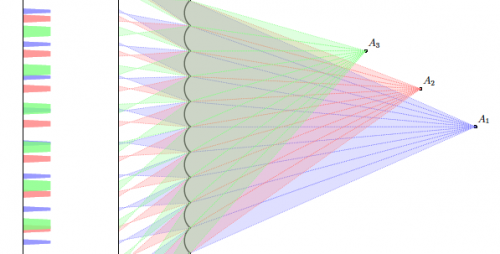 Image on the left: principle of the plenoptic imaging of a scintillator (Credit: R. Terrier)

For the requirements of the gamma camera, since the photon density on the imager is very low, the SPADs are used as digital detectors. A digital coding electronics using this property is integrated on the same substrate and makes it possible to go back to the address of the affected pixel. The matrix thus functions as a true imager sensitive to 1 photon.

A first step in the realization of such an imager is in progress; it consists in producing a prototype of a SPAD matrix integrating the electronic coding of the address. The first ASICs were designed in collaboration with the Le2i and have just been produced in AMS CMOS technology 0.35. 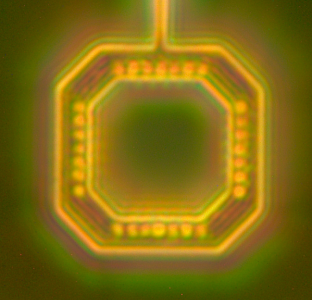 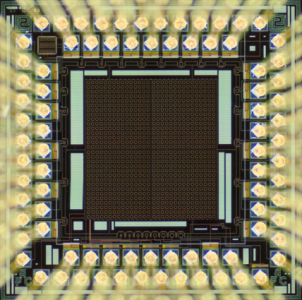 SPADs are currently characterized by light. This first step will make it possible to undertake the design of a larger imager. The breakdown voltage of a SPAD in CMOS technology 350nm is only 13V.  Image de droite: I(V) d'un SPAD de 10 µm 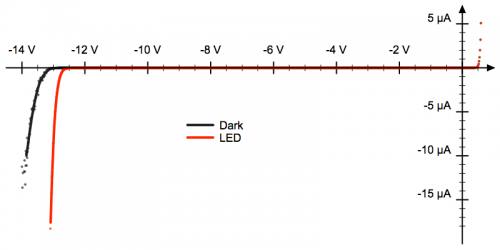 The front-end multiplexing technique implemented in the ASICs is based on a digital encoding technique detailed in the figure below: