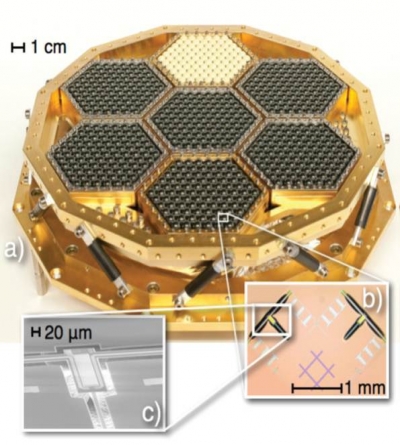 The Cosmic Microwave Background (CMB) provides a snapshot of the Universe, when it was only 380,000 years old. At that time majority of the CMB photons interacted with the matter for the last time. Using well-established laws of physics this picture can be rewinded back to the very birth of the Universe, when at ~10-35 s after the Big Bang, it is thought to have undergone a period of exponential expansion called inflation. CMB anisotropies provide a unique window on both the very early Universe and the physics at energy scales not accessible in laboratory experiments. Exploring this opportunity is an ultimate science goal of the POLARBEAR experiment and our group at APC.

CMB photons are polarized. Unlike the intensity, the scientific potential of the CMB polarization signature is still largely unexplored. The polarization pattern is usually decomposed into its parity even and parity odd components called E-modes and B-modes, respectively. At the time of the last scattering only gravitational waves can produce B-modes, while at later time gravitational lensing exerted by intervening structures also can convert a small fraction of E-modes into B-modes. The B-mode signal therefore offers the most direct view of the early Universe but also bears footprints of the structure formation. This is specifically this observable, which the POLARBEAR experiment aims at capitalizing on.

POLARBEAR is a CMB B-mode experiment built around two key requirements: high sensitivity and exquisite control of the systematic effects. It operates from a high-altitude site in Northern Chile and is composed of a two-mirror reflective
telescope and a cryogenic receiver.

POLARBEAR observations are conducted from the James Ax Observatory in the Atacama desert at an altitude of nearly 5200 m. The site ensures a unique combination of atmosphere dryness, sky coverage and logistical accessibility.

The POLARBEAR telescope, called the Huan Tran Telescope, is an off-axis Gregorian telescope with a 3.5 m primary mirror. Its design provides low cross-polarization and astigmatism. When combined with the optics of the receiver, the FWHM of the beam is 3.5’ providing a sufficient leverage to disentangle primordial and gravitationally lensed origins B-modes.

The Receiver
The cryogenic receiver houses the focal plane and the optics. It includes a half-wave plate, which can be either stepped or rotated, and which is a key element for controlling the systematics of the experiment. The focal plane is composed of 637 orthogonal pairs of Transition Edge Sensors (1274 detectors) cooled at 250 mK, with a total field of view of 2.4 deg. 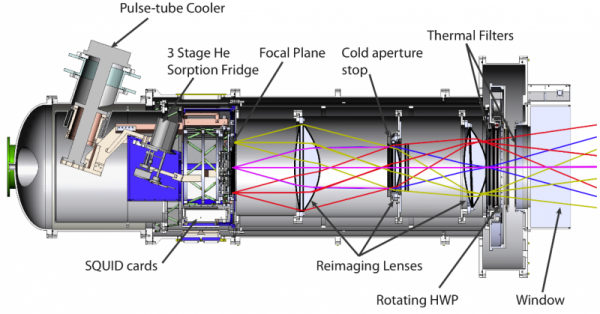 From May 2012 to June 2013 POLARBEAR scanned three 10 square degree patches. Their locations were chosen for low dust emission, overlap with other observations, and their visibility from our vantage point at Atacama. The resulting deep maps were then used to probe different aspects of the lensing B-modes - at small angular scales (from l = 500 to 2100).

Gravitational lensing of the CMB

We have provided some of the strongest ever pieces of evidence for lensed B-modes signal either via cross-correlation of our maps with the Hershel cosmic infrared background maps (on 4.2 σ level), or from an analysis of 4-point moments of the polarization maps only (4 σ).

We have set constraints on the B-mode power spectrum finding an evidence (97.5% c.l.) for nonzero sky power consistent with the predicted lensing B-mode signal. Our results improve on the previous ones by more than one order of magnitude and still today, i.e., in the fall of 2014, they have not been surpassed by any competing experiment. 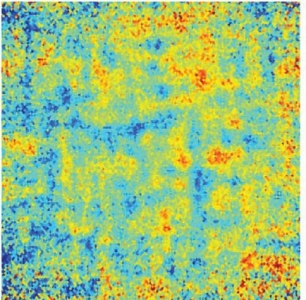 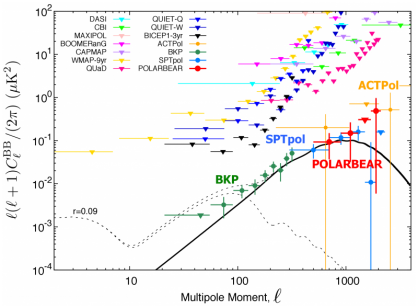 In the summer 2015 the POLARBEAR 2 receiver will see first light. The focal plane will have 1897 dichroic pixel. This new technology embeds in each pixel 2 orthogonal pairs of bolometers operating at 95 and 150 GHz. POLARBEAR 2 will observe a sky area ≥ 1%, enabling to probe the primordial B-mode signal.

Two more copies of POLARBEAR 2 will be deployed by 2017. They will feature two frequency bands each, optimized for the efficient foreground cleaning. The three telescopes operating together will offer unprecedented sensitivity over significant fraction of the sky (up to 20-50%) and will allow setting tight constrains on the primordial gravitational waves (r < 0.003 2σ c.l.) as well as the total mass of the neutrinos. (mν < 60 meV 1σ c.l.). 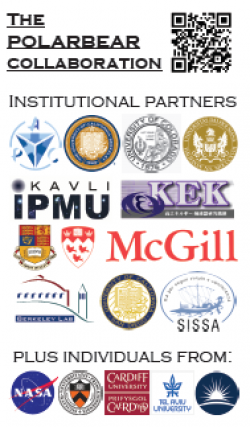 Our group at APC has contributed substantially to the POLARBEAR data analysis. We have developed one of the two pipelines used to derive the 2014 results and led an effort to characterize instrumental effects.