The LSST (Large Synoptic Survey Telescope) is a project of a telescope in Chile, intended to realize from 2015 a sounding of the southern sky (20 000 square degrees) in 6 photometric bands (visible). The objective, as far as we are concerned, is to obtain constraints on the properties of the black energy complementary to those of BOSS. 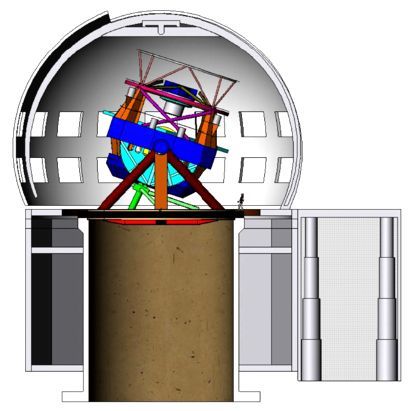 The LSST is a telescope project 8.4 m in diameter, which is expected to take its first scientific images in 2022. It will be located in Chile, at the Cerro Pachón, which already houses the Gemini Sud telescope. The camera will have a 200 CCD 4k x 4k mosaic, totaling 3.2 billion pixels, giving it a field of view of ten square degrees.

At a rate of one pose every fifteen seconds, the LSST will be able to cover the entire visible sky of Chile, covering 20,000 deg2 of the sky, in six wavelengths of the visible (u, g, r, I, z and Y). These are the same bands as the Sloan Digital Sky Survey (SDSS) with the Y-band in addition. At the end of the program planned over 10 years, each field will have been imaged several hundred times, reaching a sensitivity R = 27.8AB mag.

Frequent returns to the same place in the sky make it possible to be sensitive to transient phenomena such as supernovae and asteroids (including those that could threaten the Earth). The depth of the reading obtained by summing all the exposures allows the study of the effects of gravitational lenses, oscillations of baryons, the structure of our Galaxy... The volume of data produced is analogous to that of the LHC (15-30 TB per day). Among other things, it is planned to build a catalog of 3 billion galaxies and to observe 2 million of la-type supernovae.

The design of the telescope itself is original. In order to have a very large field, the optical design is very compact, the light being reflected on three successive mirrors before reaching the camera, which comprises three enormous corrective lenses. The first and third mirrors are polished continuously in the same block of monolithic glass, which was melted in the summer of 2008 in Tucson, Arizona. The first mirror thus forms a ring around the third.

The considerable advantage of the LSST is that it brings together a very large mirror and a very large field camera, giving it an unmatched extent (the extent is the product of the surface of the mirror by the covered field, and it plays the same role for A survey telescope as the luminosity for a particle accelerator).

Under the direction of Steve Kahn, the LSST project is in the study phase with the constant support of NSF and DoE in the United States. Three teams take care of the design and realization of the telescope, the camera and the data management. Construction is expected to begin in 2014, the first light is expected in 2022, and the program will continue from 2016 to 2026.

Science with the LSST

Using a common database, the LSST will allow for a range of scientific research ranging from the search for small objects in the solar system to the precision astrometry of the outer regions of the Galaxy and to the systematic monitoring of transient effects In the optical sky. Ten scientific panels have been set up for this purpose: 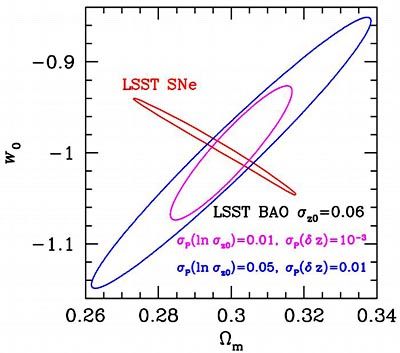 The figure shows the expected results of the LSST on the values of the cosmological parameters w and Ωm: the interest of crossing several methods is obvious.

Several CNRS-IN2P3 laboratories are joining the consortium (APC, CCIN2P3, LAL, LMA, LPNHE, LPSC, CPPM in Marseille, LPC Clermont, LUPM in Montpellier). In close collaboration with SLAC, the IN2P3 teams focus mainly on the construction of the camera. It is the image of the project: 1.90 long, with a focal plane 64 cm in diameter, for a total cost of about 100 million dollars.

The role of the APC in the LSST project

The APC is particularly interested in the study of the distribution and evolution of galaxy clusters, the acoustic oscillations of the baryons and the effects of gravitational lenses. The LSST is indeed admirably well placed to study the nature of dark energy. The measurement of the acoustic oscillations of the baryons is well tested with redshifts measured spectroscopically, but the LSST proposes to measure them photometrically ("Photo-z") as often as possible. The accuracy of these photometric measurements is therefore a critical point of the program and the first scientific objective of the PCA in this project. 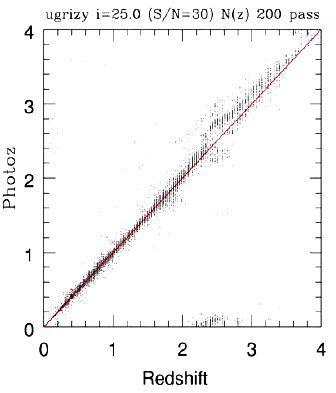 Several LSST scientific programs require that the luminosity measurements made by the telescope be calibrated to the nearest percent. In order to regularly achieve such accuracy, the APC performs a modeling of the effects of the atmosphere, which requires extremely careful and meticulous work, in particular the modeling of all the absorption lines of the atmosphere.

The figure shows a comparison between the accuracy of the measurement of red shifts by the spectroscopic method and the proposed photometric method.

APC is also exploring the feasibility of using calibration data from an auxiliary 1m diameter telescope constructed adjacent to the LSST.

The APC also supported a part of the camera control and control via the definition of the communication bus architecture between the control system submodules, which will be implemented in Java. The laboratory will also carry out the implementation of one of these submodules, one that drives the filter changer, a huge carousel that must regularly place a new filter in front of the focal plane. The mechanical realization of this carrousel is partly the responsibility of the LPNHE. Until a mechanical prototype exists, we will also develop a software simulator of the filter changer.

There are six permanent researchers and professors in the APC LSST group: three permanent engineers, one postdoc, one non-permanent engineer, and one student. Our largest technical contributions to LSST are focussed on the construction of its camera: the architecture and development of the camera control and command systems and development of the filter-change sub-system. We also do scientific coordination for the French camera construction.  Principal scientific themes are galaxy clusters, joint analyses and cross-correlations between different probes, and gravitational lensing.