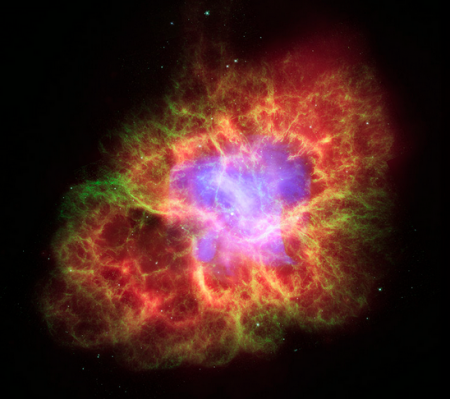 Researchers from the high energy astrophysics group of the APC laboratory are studying the various high energy phenomena at play in the universe: accretion and ejection of matter on stellar and super massive black holes, particle acceleration mechanisms and their limits around compact objects and supernova remnants, origin and mechanism of gamma-ray bursts, nature of the ultra high energy cosmic ray particles as well as their origin and acceleration sites.

To tackle these issues, the high energy astrophysics group is deeply involved in the development and operation of high energy experiments: Gamma-ray astronomy, thanks to a privileged access to the Integral observatory and to the very high energy Cerenkov telescope H.E.S.S. in Namibia. Charged cosmic-ray physics, thanks to the Pierre Auger Observatory to measure the spectrum of the highest energy particles. Neutrino telescopes, with ANTARES which is a first step in the opening of a new astronomical window directly linked with proton acceleration sites. Moreover, the team is also involved in the building of the UV-IR X-shooter spectrograph to characterize the afterglow emission of gamma-ray bursts and help determine their origin. Beyond these experiments, the researchers are involved in future projects such as H.E.S.S. 2, CTA, Auger-Nord, EUSO and a km3 size neutrino detector.

The high energy astrophysics group also develops strong connections with other groups such as the cosmology one through the study of gamma-ray bursts and the theory group for the data interpretation and the modeling of the phenomena at work in extreme sources.